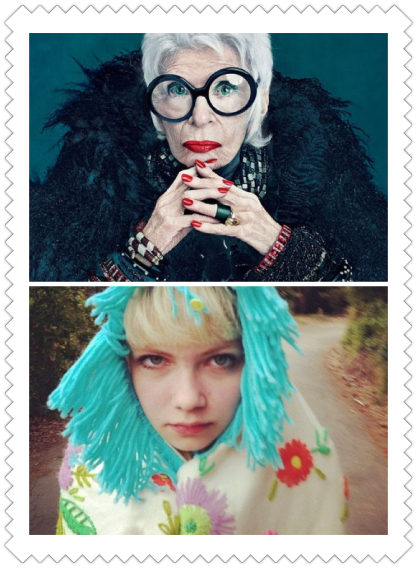 There is no age limit to be trendy or fashion, in this article this two person will prove this statement. Tavi Gevinson versus Iris Apfel. 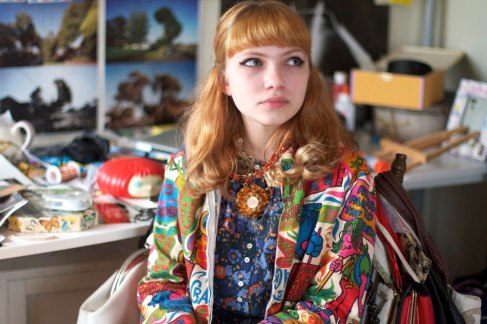 Tavi Gevinson, who is the youngest fashion blogger, she post her style and evaluate different seasons trend in a profession way which is impossible in her age. Her parent don’t really like what she is doing until she was invited to be New York Times magazine cover story.

After that, she often appeared in magazine cover, fashion week. And she even found “Rookie magazine”.

She mentioned that she was a fashion blogger but also a feminist. She said it sounds contradiction but it not.  For her own belief about been a feminist  is not a rule book but a discussion, “ One thing that can be very alienating about a misconception of feminism in that girls then that that to be feminists that have to live up to being perfectly consistent in their belief, never being insecure, never having doubts, having all the answer…and this is not true and actually recognizing all the contradictions I was feeling became easier once I realized that feminism was not a rulebook but a discussion, a conversation, a process.” This inspired her to come up with an online magazine – rookiemag.com. It contain all the story, videos, drawing from all the readers.

When I become old, I swear I’m not going to head down to dress up stylish; Iris Apfel will be the best model to follow. The signature of her Look will be the round eyeglass and charming red lip.

The cool thing I find about her is she had took part in design restoration projects with White House for nine different presidents, nine presidents!

On the other hand, she has a great sense of interior design.

This is the motto I love from her “ When you don’t dress like everybody else, you don’t have to think like everyone like everybody else.” I can’t agree more. According to Guardian interview, she also said “ Coco Chanel once said that what makes a woman look old is trying desperately to look young. Why should one be ashamed to be 84? Why do you have to say that you’re 52? Nobody’s going to believe you anyway. So why be such a fool? It’s nice that you got to be so old. It’s a blessing.”

And this is the illustration by Joana Avillez of Tavi Gevinson and Iris Apfel, she also hand drew other celebrities with their iconic personalities.