Couple days ago, I went to see Royal Academy of Arts summer exhibition; this is first time I see this exhibition. When I bought the ticket, it came along with this work brochure. In the brochure, it gives you the information of work, designer name as well as how much does the work cost. Finally, I realized actually you can buy those works if you got money; I understand art is priceless, but when people put the price on it then you can’t help to judging the value of the work by how much it cost. Beside the artwork, you will see a red circle sticker that indicates this work has been sold. Some of the works have more then one editions, so if it’s a popular artist you will see there are lots of small stickers on the side; then I start to count how much they have earned, and have a conclusion in my mind echoing: “wow, that is a lot of money!!”

There are countless of great work in different showrooms, the most astounding work I found is The Vanity of Small difference by Grayson Perry, The first time I got to know this artist was from Vogue magazine, because he is a transvestite; therefore he wore women clothing and transform into a different character – Claire; his feminine icon is eye catching, with colour splashing outfit and bold make up. 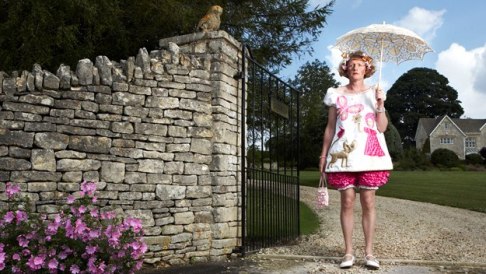 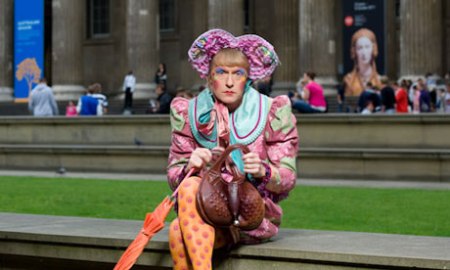 Grayson Perry is first famous of his pottery work, the pot is like a canvas for him to depict a story referring from historical and contemporary themes; thus, when you are looking at his work, it’s better to get closer and look at the details.

Grayson Perry, he was invited to created a documentary about the class and taste for channel 4; at the end, he presented his work according to field research and created six tapestries to represented taste based on classes. In order to get inspiration, he experiences the life from working class, middle class to upper class. So then he traveled from Sunderland to get ideas for his working class work and the British middle class Tunbridge Wells and Kings Hill; Moreover, he explored the upper class in Gloucestershire, Cotswolds. Through traveled in different places, he indulged himself to the local society and mimic the way they look to get the right interpretation.

After the exploration through various classes, he came up with six tapestries. The tapestries are a modern retelling of Hogarth’s Rake’s progress. It tells the story of Tim Rakewell, he born from poverty, and then he earn a fortune to move his social status upward. Unfortunately, he dies after crashing his Ferrari simply because not wearing the sear belt. The final tapestry state “ Taste doesn’t matter, it argue, when you leave the world naked.”

I agree with Grayson Perry final sum up of his work after been through so many different journeys; he said:” There is no such thing as good and bad taste. Good taste is that which is approved of by your friends, your family and the community that’s around you.” I think is quite the same in fashion world as well, people judge what people’s wearing. But when you are defining the good and bad taste, it is hard to give an objective point of view. To be honest, fashion taste is very subjective and personal; however, I would strongly recommend watch the documentary first before looking at his work. Sometimes we hear people saying I don’t understand this artwork, is because they didn’t see the true meaning behind it.

The Adoration of the cage fighter

The agony in the car park

The annunciation of the virgin deal

The upper class at bay 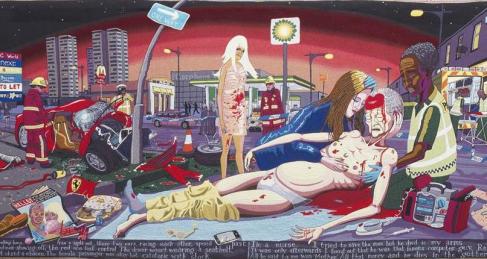